Minka is a sunny and spacious apartment, named after a cute little cat that lived in this house. The apartment is modern and well equipped for 5-8 people. Since it is in the very center of Prague, you can pop in to relax or make yourself a quick snack during the day. Minka’s kitchenette is equipped with a coffee maker, microwave oven, toaster, etc., everything needed to prepare breakfast or other basic meals. The kitchen is smaller, but more practical for groups that prefer having 3 quiet rooms, 2 completely separate and little cooking to be done. For those who would like to stay for a longer period of time, Minka is equipped with a washing machine. The apartment is located in the historic district of Mala Strana with a 10 minute walk to the Charles Bridge or the National Theatre. From here you can easily enjoy all tourist attractions, culture, as well as Prague's best bars and restaurants everything not more than 20 to 30 minute walk away. As all our other apartments, there is a high speed internet connection. Also the apartment is non-smoking with the option of smoking on the balconies. If you want a better idea of what the apartment looks like, scroll down to view the floor plan. The building is equipped with keyless lock codes, useful for booking at the last minute

The apartment building is located under the Petrin hill, near the river in the area called Mala Strana. It was built in 1895 by a well-known architect, who built it for himself, explaining its good qualities. Petrin is undoubtedly the best place for those who like visiting tourist attractions as well as having a taste of nature at the same time. Just behind the building is the historical Hunger Wall, which has served to defend Prague. In 1361, the year of drought and poor harvests, the prices of bread increased severely, which left many people without enough food. In order to feed their families, the locals resorted to frequent theft, augmenting the criminal activity. King Charles IV therefore called upon the locals to build a protective wall from Petrin to the Vltava River. The construction took two years and fed many families, resolving the problem. The Prague people named the wall “The Hunger Wall”, because its battlements resembled the teeth of the starving folks building it. At the end of the street is Kinsky Square, known especially for the T34 tank, which commemorated the liberation of Prague by the Soviets in 1944. After the Velvet Revolution in 1989 an artist David Cerny painted it pink. Actually, it was not so much of a political gesture as an attempt to capture the attention of some girl. Later a fountain was built in the original location where the tank stood, but there still a little pink part of it on the square which constantly reminds us of our history. The apartment is also near the French Quarter, only a 5 minute walk from the French Lycée. For those who plan to stay in Prague for a bit longer, will appreciate the proximity to a nearby shopping center called Novy Smíchov, which is only 2 tram stops away. The tram stop (tram line 6, 9, 12, 20, 22) is right in front of the building as well as a bus stop, line 176.


Apartment use and noise: you commit to take care of the apartment and respect neighbours, particularly by respecting the interdiction of making noise between 22:00 (10 and 7 a.m. (which could result in 100 euros fine deducted from the damage deposit if neighbours complain about you and the police testify against you). Prague has many great places to party outside, and we wish you to enjoy it at best, the apartment is greatly located for that ;-)

PLUSES AND MINUSES:
+ Minka is located in the very center of Prague, only 10 minutes of walk from Charles Bridge
+ Keyless access to the building and to the apartment - you will only need a code to open the door
+ There is a balcony in the apartment which can be a practical thing for smokers
+ There is a washing machine and a dryer in the building
- The apartment is situated on the 3rd floor without an elevator 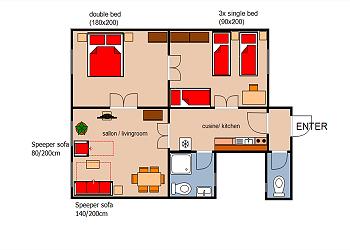