If you like romantic scenery, Loreta is the place for you. There is nothing more pleasant than a drink on the balcony after a tedious day of sightseeing with a beautiful view of Prague. The balcony is just above a nice garden, well- kept by occupants in the other apartments. You can also see a nearby park called Petrin, the largest “green” area in Prague. Since the apartment is located in a pedestrian area, one minute from the Prague Castle, the rattling of trams or the vexing traffic noises will not disturb you. Loreta is perfect for a hot summer day, thanks to the strong walls and a basement, typical for Prague's 18th century buildings. On the other hand in winter, Loreta will delight you with pleasant floor heating throughout the whole apartment. Due to the numerous restaurants and pubs nearby, you might not even notice the miniature kitchen which is unsuitable for preparing complex meals, but fully equipped for preparing breakfast or a quick snack. Loreta is ideal for 2-3 guests and the optimal price is calculated according to this. If you choose to stay here with a group of five people for example, you will save some money, but you might find the bathroom and kitchen, as well as the water heater insufficient. As all our other apartments, there is a high speed internet connection. Also the apartment is non-smoking with the option of smoking on the balconies. If you want a better idea of what the apartment looks like, scroll down to view the floor plan.


Most of the houses, located in Loretanska Street, were built on a burnt-out area after a fire in 1742. The name of the apartment as well as the street it is on are named after a well-known baroque historical sight with unique chimes, donated by merchant Eberhard von Glauchau. Every hour Marian songs start to sound and on holidays religious music is performed by organ players. Loreta chapel is a copy of Santa Casa, the saint house in Italian Loreto that has been worshiped as a place of the Incarnation. Loreta and its surroundings are connected with many legends; unfortunately most of them are sad. One of the well-known ones is about a poor widow and her children. At the time of a plague all the widow’s children got sick and passed away one by one. Every time she buried one of them, she took her saved up coin and had the bells rang for the poor child. Eventually she became sick herself. When she died, the glockenspiel started to play a Marian song which we can hear today.

Apartment use and noise: you commit to take care of the apartment and respect neighbours, particularly by respecting the interdiction of making noise between 22:00 (10 and 7 a.m. (which could result in 100 euros fine deducted from the damage deposit if neighbours complain about you and the police testify against you). Prague has many great places to party outside, and we wish you to enjoy it at best, the apartment is greatly located for that ;-)

PLUSES AND MINUSES:
+ Loreta is located in the very center of Prague, just one minute from Prague Castle
+ There is a balcony in the apartment which can be a practical thing for smokers
+ Romantic view over the historical center of Prague
+ Situated on the 1st floor
+ Very quiet at night thanks to its location
+ The apartment has a fully equipped kitchen
+ High-speed wifi provided
+ Many nice cafés and restaurants in the neighbourhood 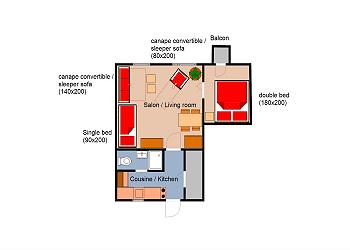